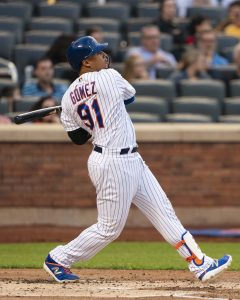 Gomez’s big league career began and ended with the Mets. He debuted in the league in 2007 as a highly touted youngster, but the Mets traded Gomez to the Twins in a package for then-superstar left-hander Johan Santana in the ensuing offseason. Gomez’s tenure with the Twins also proved to be short-lived, though, as they dealt him to the Brewers in a trade for shortstop J.J. Hardy in November 2009.